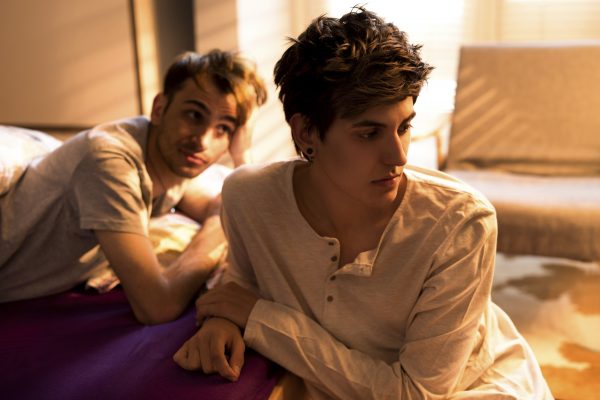 I met Anthony through work when I was 22. The relationship seemed ok in the beginning, but in hindsight, there were warning signs of what was to come. They were little things at first: coming over unannounced; showing up unexpectedly when I was out with my friends; phone calls that seemed to be a little too frequent. I made the mistake of interpreting these early signs as strong romantic interest. Before long he had moved in with me and his behaviour had become obsessive and controlling.

One of the biggest head-fucks was being told that the violence was part of his “culture” and the fact that I had a problem with it meant that I was racist.

Anthony was really threatened by my friends and my social life. He hated that other guys would look at me, or that I’d slept with other guys around our neighbourhood, even that I had quite a lot of friends who he felt “competed” with him. Tiny things that had not even occurred to me as being possibly offensive would cause enormous rage. The more I was attacked, the more and more I withdrew. It was a self-defence mechanism – I figured if I could stay away from anything that might cause him to get upset then that would keep him calm. That didn’t work of course – he simply found new things to be insecure about. I realise now the whole strategy was to keep me feeling perpetually blamed, inadequate and not doing enough to keep the relationship together. I isolated myself from my friends, my family and from everything that I used to enjoy doing. To get me away from my previous life, friends and sex partners we moved to a different city where I knew no one except him.

I was by nature a very happy, outgoing person, but I quickly became cautious and scared all the time. My fear escalated when the physical violence began. The first time was because he had seen me talking to someone I’d had a fling with in the past and he punched me in the face because of it. From that time on, even though the physical violence was occasional, the fear of it happening pervaded my life and he would threaten me with it often. Punching, pushing, restricting my physical movements (like blocking doors if I was trying to leave a heated situation), destroying or giving away my property and refusing to take care of me if I was sick were punishments that would be meted out when simply threatening me or humiliating me in public wasn’t enough.

Anthony was from a racial minority. One of the biggest headfucks was being told that the violence was part of his “culture” and the fact that I had a problem with it meant that I was racist. The problem according to him was not the violence – it was the fact that my racism meant I couldn’t accept who he was. It was me not him, that had to change. I now understand that violence is not culture – there is no ethnic group on the planet that celebrates partner abuse as a cultural identity.

Apart from my massive social withdrawal, the affect on my sexuality was really destructive. I became ashamed about being gay, about being sexually attractive and about having sexual desires. It was like going back in the closet.

Money was another big problem. Successive rent periods came where Anthony would spend all of his pay on gambling and alcohol within 48 hours of receiving it, leaving me to pay all the rent and then provide food for us for a fortnight – impossible and it meant instant poverty. As a “solution”, Anthony put me in control of his finances but it was only a licence for him to be as irresponsible as he liked and simply demand more money whenever he wanted it. Of course, refusing because the rent needed to be paid for example, was a dangerous move. On top of all of this, he would also frequently get me to do his work for him. It wasn’t uncommon for me to be producing his reports until all hours of the morning while he watched TV. I had given up on my life ever being enjoyable again. My whole sense of individual identity was gone and I felt as though I barely existed.

A lesbian friend from the previous city I lived in sent me a book about SM sub-cultures (one of her favourite things) that contained a chapter on the difference between an SM relationship and domestic violence. There was a checklist of questions to ask yourself to determine whether you were in an abusive relationship and when I found I was answering yes to almost everything, a crack appeared in the brainwashing and manipulation that had filled my head. I suddenly realised that I had to accept that I was in a domestic violence relationship.

I took the grand leap of confiding in someone I worked with about my situation and one afternoon, after Anthony threatened to “break both my legs” when I got home that night, this colleague generously lent me his spare room for a week while I “disappeared” from my home. During that week I found a new place to live and, with a Gay and Lesbian Police Liaison Officer, I went to pick up my belongings and left.

A new phase of harassment and stalking that included a wide range of manipulations and threats (ranging from “Come back – I’ve changed!” to “If you have sex with another man I’ll kill you and him”) followed.

I decided to move to another city again and start a new life. It’s taken a long time to feel confident about having sex again and the idea of getting emotionally close to someone is still shaky. I still feel wounded. But I’ve learnt some really important lessons about violence and the difference between control and love and I’m slowly working off the debt I left the relationship with. Day by day, I am rediscovering who I am. The most important thing for me now is that I am safe, I control my own life and I don’t live each day terrified of going home.